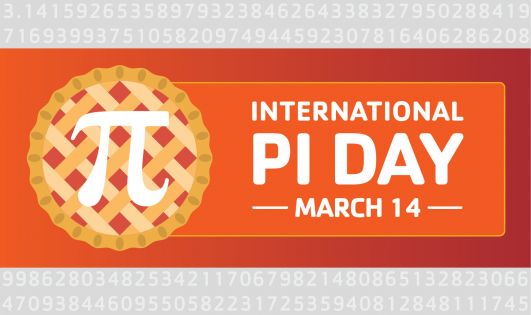 Those of you who aren’t mathematically inclined may not be aware of the fact that today, March 14 (3.14), is International Pi (π) Day.

Pi is a mathematical constant — derived from the ratio of the circumference of a circle to its diameter — roughly equal to 3.14159; although, its decimal representation never settles into a permanently repeating pattern and is allegedly infinite. We say allegedly infinite because that’s never been factually proven. With one exception, everyone who’s attempted the proof has died of old age. The exception was Wilbur Freemish from Baked, Alaska. Wilbur’s wife, Agnes, found him unresponsive at his desk. The autopsy revealed he’d aspirated some seeds from a slice of raspberry pie he was eating as he calculated.

When Agnes was brought into Police HQ for a preliminary interview, she blurted out, “It serves the chooch right. All he ever did was play with those damn numbers!” Agnes was never considered a suspect in Wilbur’s demise. But her statement wouldn’t have mattered, either way, because the cops weren’t recording the interview or listening to Agnes. They were working on their own decimal representations for pi.

At any rate, due to poor communication and current supply-chain shortages, the first announcement of International Pi Day caused a panicked market run on apples, peaches, blueberries, strawberries, rhubarb, chocolate, custard, banana cream, lemon meringue, and key limes. There were no shortages of mince, of course, because no one actually likes mince pie.

On hearing of the confusion, the International Mathematical Union issued the following statement:

It is with deep regret that we acknowledge the besmirching of our beloved π. Without it, the areas and circumferences of innumerable circles would remain unknown to us to this very day. As a boon to trigonometry and physics, π has spawned countless formulae, especially as they pertain to ellipses and spheres. Let it be noted, as well, that pi occurs in various mathematical problems involving the lengths of arcs or other curves, the areas of sectors and other curved surfaces, and the volumes of many solids. It’s used in various formulae to describe such periodic phenomena as the motion of pendulums, the vibration of strings, and alternating electric currents. And in the field of entertainment, π was a foundational element in classic performances of the Three Stooges.

No matter how you choose to celebrate International Pi Day, we hope you enjoy it.

But watch out for the raspberry seeds.

To Go, or Not To Go, That is the Question

The Tortoise and the Cloud
Scroll to top