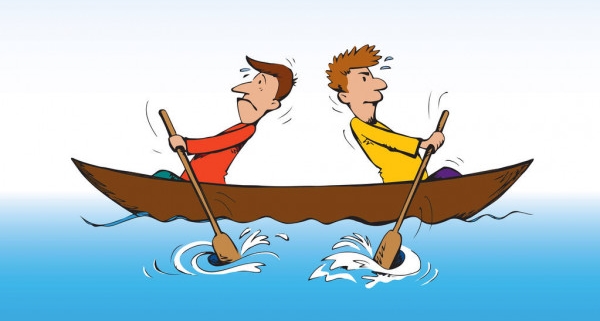 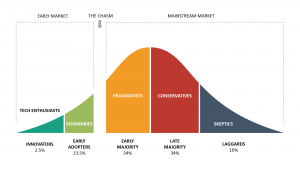 We seem to have been writing and speaking a good deal lately about change — the changes undertaken during the COVID pandemic, the changes that could have and should have been considered before the COVID pandemic, and the changes we should be undertaking now in anticipation of the next pandemic or the next catastrophic business interruption. In particular, we’ve been writing and speaking about digitalization, the adoption and adaptation of digital technologies for business processes. In other words, the conversion of text, pictures, or sound into digital form for automated processing on computers, as opposed to the manual processing of analog media like paper or whiteboards.

During all of that writing and speaking, it occurred to us that the lion’s share of the friction being experienced in the move toward digitalization is attributable to rates of change. In general terms, we’re referring to the technology-adoption curve that’s typically rendered like the image in Figure A. Somewhere between the so-called innovators and the early adopters, there’s a gap. Skepticism, fear of change, and fear of failure live in that gap. As people begin to creep across that gap, the early majority and the late majority adopt a given technology as it begins to succeed and make its adopters feel safe. By the time the laggards get around to adopting the new technology, it’s already being superseded by a newer technology. And on it goes.

In more specific, insurance-industry terms, the gap exists between policyholders (and prospective policyholders) and the insurance companies with which they choose to do business. And the insurance industry’s historically slow pace of technological adoption and adaptation is creating greater friction and lost opportunity. To be fair, individuals (like policyholders and prospective policyholders) can explore and embrace technological advancements — and change their behaviors and their expectations — more readily and easily than companies and entire industries can. But that reality notwithstanding, friction and lost opportunity exist.

We should bear in mind that there are numerous definitions of legacy. Two of them are:

If we remain mindful of both of those definitions — and if we embrace the technological change that shapes the behaviors and expectations of our customers — we can transform #1 into #2.

That will bring our respective rates of change much closer to each other.